Over the last twenty to thirty years or so, subtle changes have been occurring on and around this Planet.  Not that that is necessarily different to any other time in history – but it is the WHAT of that which has been happening that is the difference. 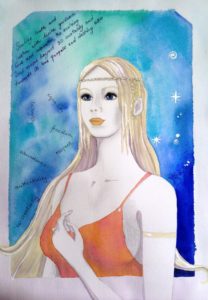 The arrival of The Divine Feminine energy was heralded and began to take hold in certain places, in certain communities.  The Goddess became the latest buzzword in spiritual and semi-spiritual circles.  Books, workshops, divination cards; it was the keyword in many esoteric circles.  There was a sense of the divine mother, the re-emergence of the gifts and abilities of the female to enhance and transform, and the ancient wisdoms of the long repressed bringing woman’s values and knowings to once again re-emerge in a newer and more powerful way to join ranks with and to temper the male’s energies.
Then it seemed to me that things began to get a bit confused.  Domestic violence increased, or rather, the reporting of violence increased.  This could have well been attributed to women attempting to right the wrongs experienced by them; all part of the furthering of respect of women and womanhood.  Further dark and dirty doings began to be highlighted, with more exposure of the rortings and raidings operating in the so-called ‘civilised’ world.

Fast forward to today and suddenly in our current reality it now appears that women are even more behind in equality with men, and women in power not always of the calibre of what most women would wish to represent her.  Still huge discrepancies between the ‘status’ or treatment of men versus women.  The move to embrace a more balanced expression between and by both sexes seems to not only have been arrested, but to be slowly sliding backwards.

Then a totally different ideology began being imported into most Western worlds with a totally misogynistic attitude, and hell-bent on assigning women back to the lowest of the low again, only worthy for government claims, sex, slavery and increasing the population of this encroaching culture.

Standing back I ask myself ‘What went wrong’? and realise that nothing has gone wrong – This is yet another trial for the Planets female supporters, the suffragettes and feminists of this world asking for female equality, for female rights.  It is a ramped up battle of Light and Dark, emphasised by the feminine principle (or lack of it) at the moment.  Because the Divine Feminine had to be ‘put-back-in-her-place’… Or so it would seem that this is what is preferred by those currently running the show.  This ‘battle’ is taking place on so many levels.  The Spiritual impact of the new Divine energy stirred up many, and a lot of those ‘men-y’ got scared and applied more pressure, more tactics to get things back to the way they were.  And the forces are still raging on the Spiritual, the physical and the metaphysical levels.

But this is a New Era, a New Time, and the Divine Feminine is NOT about to call it quits.

I like peace, I love harmony, I prefer everyone getting along nicely with another.

I adore pleasant sounds, appreciate beauty and nurturing, and I prefer positive words, hearts and minds and positive statements.  And so many of us do, that is what a lot of us want; peace, love, understanding.  A different ideology that glorifies death and violence is threatening every western idea of this, every western or freedom thinking nation.  That is one major battle.  And speaking words of love, peace and understanding will NOT change or integrate this other stealth ideology.

But this post is not all about that.  It’s about a bigger picture, it’s about a bigger battle – it’s about the necessity of having to stand up yet again and demand the equal respect for all women; to continue holding the space for positive change in this area.  Islam is only a symptom of what is happening. 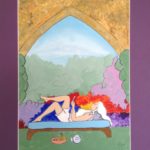 There are still so many ‘Spiritual’ people still saying ‘I don’t want any disharmony in my space, so I will ignore what is going on that makes me uncomfortable and I will think only positive, see only positive, hear only positive’.  They simply want to relax in their own little world…

Are they wrong? Definitely not!  This is totally appropriate in claiming the sort of environment one wishes to live in.  However we do not live, yet, completely out of the reach of those who would wish for totally different things than we would wish for ourselves.  And we see this in so many areas.  Learning to be at peace with the things we cannot change is necessary some times, and humanity, especially womanhood, is particularly good at adapting to one’s surroundings in order to survive.  But we can also get stuck in ‘adapting’ and ‘putting-up-with’ – until it is too painful to tolerate it any longer.  And there is no need to do so, for often by then it is far too late to change things… For our world is not totally separate from the thrashings around of others unless we are fortunate enough to own our own little island.

This is about a bigger picture – this is a fight for our future – a fight for our children’s future, our daughters and grand-daughters.  Men, too, the world over will be affected if the Divine Feminine is halted from her purpose here on the Planet.  And the Divine Feminine is not always a wishy-washy ‘get-you-your-slippers-for-you-lovey’ energy – She is an active force, a changing force, a complementary force, a nurturing force, a guardian force.  And more…** 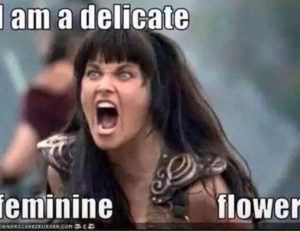 Ladies, if we want our world to be a better place, then we have to get ready to defend the defenceless and stand up for those without, as yet, the voice to do so for themselves… We can no longer depend on others to stand up for us, we have to do it ourselves.  We must become a force to be reckoned with – we must become the Divine Feminine in all her strength and power – It is time.

Men, if you can see that the world is missing out by ignoring the amazing strengths of women, if you are not afraid of having a true partner by your side and you are ready for a sharing traveller, if you respect the value of having both gender’s capabilities combined for a greater good, if you see value in the Divine Feminine, then you are more than welcome to aid in this Stand for Light… 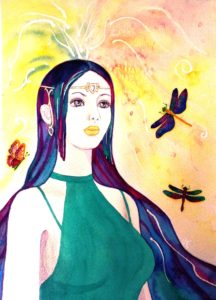 And the New Chakras will help you to unplug from the Matrix, to disconnect from Peer group pressure, to be truly grounded and anchored and aligned with your own True Divine Source. 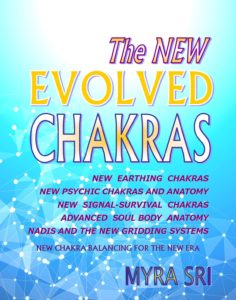 ** Image sourced from a miscellaneous post – I do not know where this image came from and if I could I would acknowledge full rights to the author. If anyone does know, I will be happy to provide intellectual rights details.